I was discreetly browsing Reddit one day when I first saw this image:

As you expected, my first reaction was utter disgust combined with a nagging curiosity about the origin of the image. Based on a comment under that post, it was from the manga Uzumaki by Junji Ito. I didn’t instantly jump to reading the manga though, not until I watched a random video commentary on Youtube about the works of Junji Ito. Here is the link to that video if you are interested:  How Media Scares Us: The Work of Junji Ito

With my newfound curiosity, I immediately went and looked for a copy of any Junji Ito manga online and I fell down the rabbit hole since that day. Today, I am going to share to you my thoughts on five of the mangas by Junji Ito that I’ve read so far.

This is the first manga by Ito that I decided to read. The story was set in Okinawa, Japan where Tadashi and his girlfriend Kaori decided to enjoy their vacation. The couple encountered a fish with legs, who made Kaori uncomfortable, not just because of the fish’s unusual appearance but also because of the smell. Tadashi decided to get rid of it. After that night, the chaos began.

It was an interesting story, but didn’t really scared me or creeped me out in any way. The story that manages to scare me a bit was the bonus story included in Gyo, which is called “The Enigma of Amigara Fault“. It was a short story that manages to touch one of the things that makes me uncomfortable; tight and cramped spaces. The story tells of a huge earthquake that has struck an unnamed prefecture in Japan, leaving a fault with human-shaped holes on it. Out of curiosity and an unknown urge, a number of people decided to check it out, only for some of them to realize that the holes were meant for them.

Imagine being so beautiful that any guy, of any age, will inevitably fall in love with you then murder you. But, don’t forget that you have the ability to regenerate, replicate, and even sprout from even a single organ from your body. Even a piece of your hair is dangerous and can be used to invade someone else’s body.  Yes, those are the abilities of Tomie. She is basically immortal.

Tomie’s succubus abilities also affect females making them blind with jealousy. I have to say that this is my favorite Junji Ito work, simply because it has so many gory parts and multiple story arcs, that going through all of the ways Tomie will inevitably die is quite entertaining and creepy. I found myself wondering who is Tomie’s next victim and how on earth will that person kill Tomie.

I give this a 4 out of 5 stars. Despite it being my favorite, I have to admit that there are stories that are a bit boring in comparison to the other ones.

Where do I begin? To tell the story of how this manga grossed me out a couple of times? The story introduced me to Kirie and her boyfriend Shuichi who lives in the fictional Japanese town of Kurouzu-cho. A town that is cursed by supernatural events involving spirals.

This manga has so many what the fuck moments that lead to a somewhat inevitable ending. I can point out so many moments in this manga that made my skin crawl but no, I want you to read it and experience it. Just do it!

I give this manga a 4 out of 5 stars. I love it and I can’t wait to buy myself a physical copy, also Tomie. Also, that first Junji Ito image that I saw was from this manga. Also, human snails. Period. 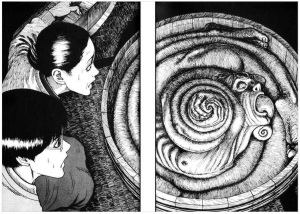 The other two mangas are so short that I don’t even know if I should even include those here. I gave both stories a 3 out of 5 stars. simply because in my opinion, they are too short! But, they still managed to entertain me a bit, so here they are. 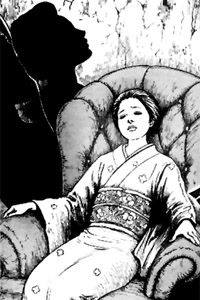 This manga review doesn’t sound like a review at all! I was thinking of ways to not share too much, but I don’t think I can. It’s all about the experience of reading it, you know?

What about you? What is your favorite Junji Ito manga? Let me know!

That is all for now. Keep safe everyone!